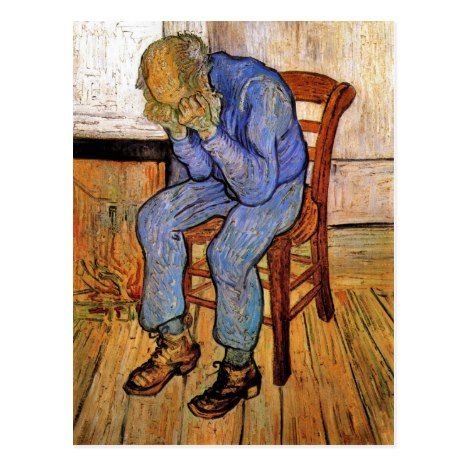 Puccini’s opera ‘Turandot’ ends in the original with the aria of the slave girl Liù. She is in love with an ‘Unkown Prince’, but he fell in love with ‘La Principessa’ Turandot, a cold and cruel impératrice. Turandot lets Liù be tortured to get the real name of the unknown prince. But Liù doesn’t give her this information. Under torture she sings her last aria, then she commits suicide. This is the end of the opera and also the last what Puccini ever wrote as he died shortly afterwards.

The aria of Liù is maybe one of the most dolorous ones I have ever heard. If I should search for one word to describe it, it is deep sorrow. Sorrow full of pain. Pain that isn’t bearable anymore.

Listen to Liù’s aria and Timur’s (the deposed king of Tartary) desperate reaction to her death. The text of Liù’s aria is the following:

After this end of the opera, there is no place for something more. Everything is left in ruins. The pure character fell. The painting by Van Gogh expresses this desperate sorrow very intensely to me. Everything is said without a word…

Full of tears will be that day
When from the ashes shall arise
The guilty man to be judged;
Therefore spare him, O God,
Merciful Lord Jesus,
Grant them eternal rest.
Amen.”

It is another kind of sorrow. A less personal one. Here it is about the whole humanity. Mozart never finishes his Lacrimosa. He dies over writing the Requiem. What did he probably feel at the end of his life? What did he feel writing this Requiem, writing his Requiem?

The Lacrimosa is written in D minor but finishes with a bright D major chord. What is this D major of the Lacrimosa in the end?

Is it hope?
Is it about a new beginning after the sorrow?
Is it the hope for something bigger after death?
This everybody has to answer for himself…